The story of Ekofish Group is closely related to the story of the Urk family De Boer. A family with a love for the sea and the fishermen’s life many generations. A family which wants to preserve a healthy sea for future generations.

The story of Ekofish Group starts with Louwe de Boer (1914-2006), one of the founding fathers of the Urk fishing fleet and a true entrepreneur. During the thirties he fished with his wooden boat (Botter) on the former Zuiderzee (now Ijsselmeer) and the North Sea. The Sole and plaice caught was traded in Urk and IJmuiden. The fish was healthy and nutritious food for the people of Urk and the rest of the Netherlands.

His seven sons followed in his footsteps and became fishermen. They replaced the vulnerable wooden fishing boat by steel ships. The North Sea cutters of the De Boer brothers were in the eighties the largest family owned fleet in the Netherlands. With as many as 21 cutters the De Boer brothers were well known fishermen in the fishing world. Their fish, especially sole and plaice, found its way to the Netherlands and abroad.

In 2000 the eldest son of Louwe, Meindert de Boer (1940) decided to leave the family business. With his six sons and three cutters he founded a new fishing company. High fuel costs were the beginning of an intensive search for an economically sustainable way of fishing. The investigation started in Germany, expanded to England, Norway and Sweden and ended in the port of Thyborøn, Denmark. After this quest the family decided to rebuild their largest cutter –their pride and glory- from beam trawling to twin rig trawling, a giant leap in the dark. Twin rig trawling was a relatively unknown, 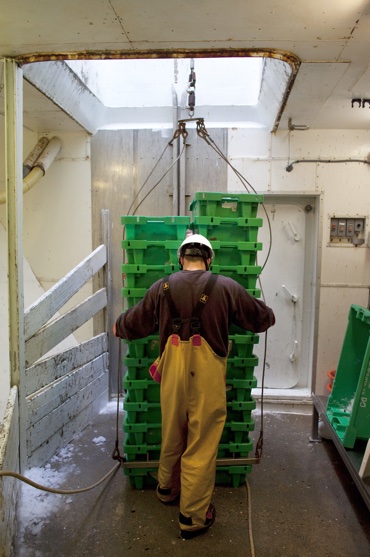 but in terms of fuel cheaper and more sustainable way of fishing. A huge financial risk, but in the spirit of entrepreneur and grandfather Louwe de Boer the family headed forward: Never give up!

2006 was the year of the first memorable fishing trip with the new twin rig fishing technique. Where once the ship's engine roared at full power while fishing, it remained remarkably quiet in the engine room. Doubt arose: did we make the right decision? But when the nets after that memorable first haul surfaced - flooding of the best quality fish - intuition was confirmed: fuel-efficient and sustainable fishing is possible. But also the awareness: what we have done in the past could obviously be different and better in future. The urge to innovate has since been firmly embedded in the DNA of the Ekofish Group.

The road to the top seemed paved. Until the supermarkets decided to ban plaice in 2007, now in red on the fish guide of the World Wildlife Fund (WWF) because of overfishing. Again, inspired by the lessons of life from grandfather Louwe de Boer "life consists in doing “, a bold step was taken: the fishing company was the first starting talks with the World Wildlife Fund about fisheries and sustainability. This led in 2009 to the MSC certification of Ekofish Group, the first flatfish fishing company in Europe!

The company has since expanded with more cutters. On board of every cutter the philosophy and quality standard of Ekofish Group is key: sustainably, with respect for environment and only the best quality fish. Since 2008 Ekofish Group therefore takes the processing and marketing of their catches more and more into their own hands. With one goal: bring the fish as quickly and as fresh as possible on the plate of the consumer.

The story of Ekofish Group is one of love for the sea and fisherman’s life, but also dare to act outside beaten tracks, persevere and overcome any adversity. A story of respect for nature, but also a natural urge to innovate, driving the men of the family De Boer since grandfather Louwe.

Even the children of the De Boer family do not build cars or farms with their LEGO but fishing boats. You do not just become a fisherman, you are born as one. A family which wants to preserve a healthy sea for future generations.